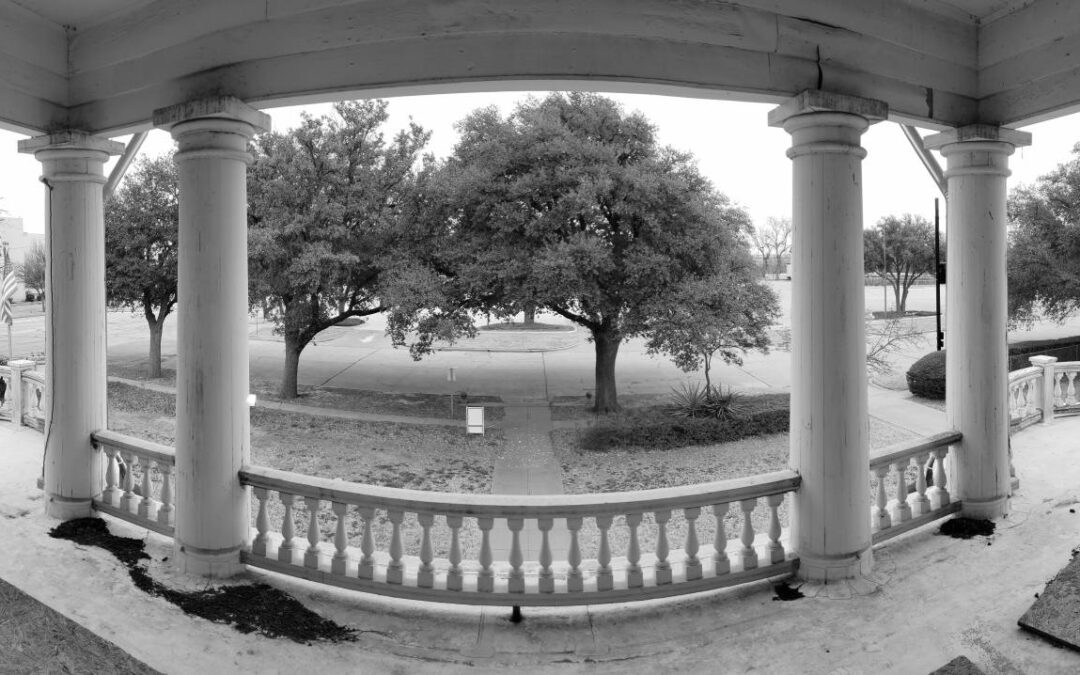 Welcome to the middle of the dog days of summer! Didn’t know that there was an official time period for that, did you? They began July 3rd, 2021 and will end on August 11th. This designation dates back to the ancient Greeks and Romans, who watched Sirius, the brightest star in the constellation Canis Major (or “big dog”), who represents one of Orion’s hunting dogs, rise along the sun in late July. The belief was that it along with the sun made this period the hottest of the year, bringing on fever or catastrophe. The translation from Latin made it into English vocabulary about 500 years ago. The Romans clearly never made it to north Texas in August…Lest we get too side tracked, get ready to get some insight on the Kell House’s Architectural features!

“When one door closes, another opens; but we often look so long and so regretfully upon the closed door that we do not see the one which has opened for us.” – Alexander Graham Bell

The picture on the left was taken in January 2021 and the one below in June 2021. It’s the same arbor on the west side of the property. It might have looked nearly dead early in the year, but certainly roared back to life.

The new greenery provided a welcome challenge to the teenager on the right (Silas McKown) and a workout when he trimmed it back with some serious garden shears! The Kell House grounds have several common garden structures, some for vines and some for visual appeal or shade. The one highlighted above is an arched arbor, as it has trellis incorporated on both sides, creating a tunnel-like passageway for climbing plants.

The two arched arbors on the site also have gates. The structure below is a pergola. Much larger and often covering a patio or garden area, the function is to provide some protection from the elements. The Crape Myrtle (Lagerstroemia) in the foreground is in full bloom, a sure sign that our area has seen lots of rain in recent days and weeks.

The roses (they’re not currently blooming) on the right also use an arbor for climbing. The sides here are specifically lattice, which are made up of crossed wooden strips and fastened together. The most common designs are squares and diagonal patterns.

A is for Architrave

We featured a similar series like this one about a year ago, and knew that there was potential for more, but the angle escaped us until the Historic Albany Foundation posted their ABC’s of Architecture online this past December. Ta-Dah! Thank you for the inspiration, good people of Albany! This week marks the first newsletter feature of the Architecture Alphabet at the Kell House. Or should it be Kell House Architecture Alphabet?

It begins with the first letter of the alphabet. And in our case the ‘A’ stands for ‘Architrave.’ The term comes from the Italian for ‘chief beam,’ it is also called an ‘Epistyle,’ or even ‘Lintel’ and represents the beam resting on the capitals of columns. We promise that by the time we are done with this series, you will know more about columns than you thought possible.

The pictures above and below show the architrave across the top of the columns on the front of the Kell House, supporting the roof. The view is facing east toward Bluff Street from the second-floor porch or balcony.

Small space, big announcement! Texoma Gives is looming on the horizon! This annual day of giving is scheduled for September 9, 2021. All north Texas (and southern Oklahoma) residents are encouraged to support their favorite non-profits on this one day. While that can certainly be done on any other day, the catch is that you can help us win extra cash prizes!

Picking the heads off flowers gets the average child into trouble. We were more than happy to provide an opportunity to do so at the Farmer’s Market this past weekend, connecting with families through gardening activities while increasing Kell House Museum and Museum of North Texas visibility at a remarkably busy Farmer’s Market! If you haven’t been recently, you are missing out!

Of a very lovely lady, who was bringing up three lovely girls…come on, we can’t be the only ones who immediately heard the Brady Bunch theme, can we? While that song plays in the background, let’s look into the mystery introduced last week.

The picture on the right has a tag that reads “Presented to Memorial Auditorium for the people of Wichita Falls by Frank Kell, December 1939.”

If you have ever wandered the halls of Memorial Auditorium, you will have seen the display pictured below. It contains a copy of the Declaration of Independence and Constitution. Originally given in 1939, the enclosure had been built by Bill Buchanan and his father.

The documents themselves had been secured by Senator Morris Sheppard, who represented Texas in the U.S. Senate from 1917 to 1941. They were accepted by Wichita Falls mayor J. C. Boyd in 1939 and proudly displayed at Memorial Auditorium’s entrance for twenty-six years.

In 1965, during a renovation of the structure, the cases were moved into a storage closet…and forgotten. Fast forward to 1976, America’s Bicentennial year. None other than Don Burkman was the Auditorium manager at the time.

Upon being reminded by a native Wichitan that a display similar to one in the National Archives showing the founding documents had previously stood at the entrance of the Auditorium, he made the connection to the dusty, with frayed matting, and broken molding case he knew was in a storage closet. Lo and behold – here they were!

The leg work to figure out where this copy of the Declaration of Independence and Constitution originated took a bit of time, but eventually it was maintenance supervisor Mahlon Hill remembering of who did the plaster work: Bill Buchanan and his father. Bill then confirmed its origin.

Jewelers Mike Hutton and his wife volunteered to refurbish the display, finishing hours before the rededication ceremony on July 2, 1976, just in time for the country’s Bicentennial celebration.

Just think, if even the Constitution and Declaration of Independence can be misplaced in a closet and lost for several years, what treasures might your closet hold?

No comments to show.